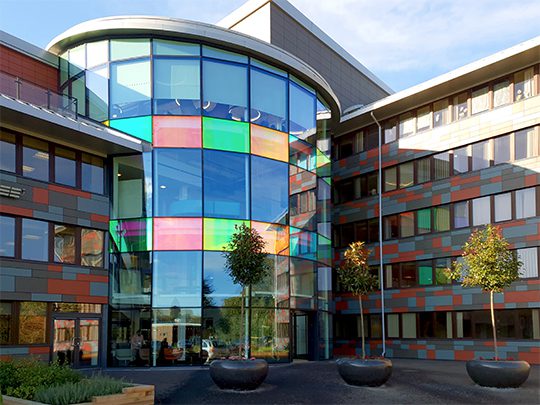 Vaughan Sound has upgraded the emergency public address system at the Office for National Statistics’ headquarters in Newport.

The ONS are a long-standing client, after Vaughan Sound was directly appointed by VINCI Facilities following previous successful work across similar public sector buildings throughout Wales.

Having inherited the maintenance of the existing public address system – which is used for important notifications and emergency announcements to staff and visitors – following a tender request back in 2015, Vaughan Sound is responsible for regular systems support across the ONS’ estate.

The public address system was originally installed in 2006, after the corporate headquarters moved from Pimlico, central London following a review into public sector relocation.

In the main it comprises of flush mounted ceiling loudspeakers throughout all zones of the building’s four floors; including corridors, open plan office spaces and public eatery areas.

As part of a Planned Preventative Maintenance (PPM) contract, Vaughan Sound fully inspects and tests the PA system every quarter. Although the system is not a formal voice alarm, it does have a battery backup for the front end and amplification. Therefore, in case of any power loss, important announcements and instructions can be made from the public address microphones that are conveniently located for key office staff and responsible persons.

Further to advisory notes during earlier service visits and due to the age and condition of the system, Vaughan Sound recommended that the ONS considered a full upgrade of the front-end rack equipment.

This would subsequently meet the requirements for additional loudspeakers, which were necessary following the reconfiguration of offices to accommodate new layouts and staff growth. Ultimately, the existing amplification had insufficient headroom and capacity to facilitate these changes.

Vaughan Sound therefore developed a detailed proposal for the facilities management teams at ONS, Newport and VINCI Facilities. This included for enhancements to the control, amplification and charging system, as well as the inclusion of an automated announcer. The rack mounted digital media playback device is used to reinforce current COVID-19 safety measures, with clear and intelligible bilingual messaging pre-loaded onto it.

A TOA VM-2240 system management mixer amplifier was paired with a VP-3504 2000W, 100V line Digital Quad Power Amplifier, which provided the additional headroom required. The VM-2240 not only permits general-purpose broadcast, but also emergency broadcast as per the EN60849 Standard which allows pre-recorded voice instructions in an emergency situation.

Vaughan Sound has successfully provided greater audio presence throughout the busy offices, with clear, intelligible announcements and a very noticeable improvement in sonic quality throughout the multi-floored headquarters.

The ONS’ offices in Titchfield, Hampshire received a similar upgrade in 2018. More recently, Vaughan Sound has also completed a new PA system installation at their warehouse facility in Christchurch, Dorset.

If you’re looking to upgrade your public address system or require professional advice from a team of experts and a company with over half a century of experience in the sound and communications industry, then please get in touch on 01554 740500 or email info@vaughansound.co.uk.