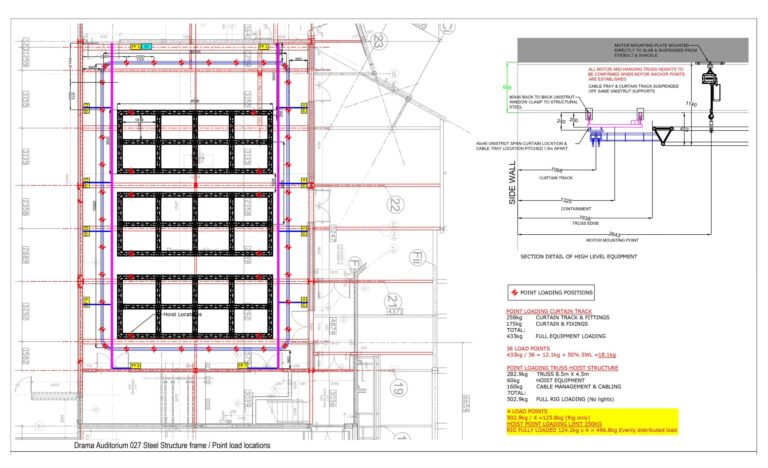 We had a very interesting consultation recently with an architectural practice and the principal contractor’s design team.

We were invited in to review the performance sound, stage lighting and audio-visual systems for a venue that comprised, amongst other key areas, three defined user spaces.

These areas were required to operate independently for 90% of the time, but on occasion would operate as two larger spaces or even one very large auditorium.

The BIM model and general arrangement drawings were reviewed, and we were subsequently able to identify the optimum orientation of the primary space. We then detailed the interconnectivity to the two secondary systems, which would enhance the primary system when required.

Following on from the meeting we were asked to put initial designs together, including equipment specification for comment, and tasked with delivering a budgetary proposal to include stage lighting, performance sound, multimedia projection, show relay, facility panels, stage curtains and demountable staging.

Additional areas were also identified such as music suites, practice rooms, ensemble rooms and a dedicated recording studio, whereby we produced a detailed design and costs for these elements too.

Drawings were issued detailing power, containment and setting out detail for the M&E (mechanical and electrical) coordinator, along with pattress requirements for any load bearing equipment and hardware.

During the design process for this project we were also able to propose potential cost savings by adopting LED stage lighting technology. This not only offered a saving on the cost of ownership but requires less electrical power and containment, while also producing less heat than conventional lighting, which is very desirable for a BREAAM Excellent project.

We were also able to offer value engineering suggestions for potential cost savings based on product selection and delivered a full technical submittal for distribution to the client end user group for feedback and review.

This project will not reach practical completion until late 2021, but our involvement at this early stage and comprehensive, considered design work will help to deliver a world class experience for all involved in this impressive scheme.